«Ever since my time with PDM, there were two races that were engraved in my memory and that I wanted to win one day. They were Fleche Wallone and specially Liege-Bastogne-Liege. This year, for mechanical reasons, I didn’t make it. After breaking away and with only a few kilometres to go, three riders caught me up. I finished 4th and Sean Kelly won but I knew in my mind that I really could have been the winner». 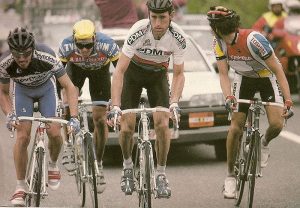 As the winner of the 1988 Tour de France, Pedro started out the Vuelta as the overall favourite. «Echávarri had great hopes for Miguel Indurain, the winner of the París-Nice that year. He was to be in full command and I would keep in the background when it came to attacking so as not to cause too much attention to my main rivals».

«I had never ridden so well as that year». He won the 12th stage in Cerler in a great battle against four Colombians. He made the best time in the uphill time trial of Valdezcaray (stage 15) and the next day, in Santander, he won the yellow jersey. The team did not have a good day in the Lakes stage; Induráin fell on the Fito descent and broke his wrist and Pedro had difficulty in keeping the leadership, specially against Fabio Parra who was only 2″ behind him in the general classification. «The team always devoted its attention to Induráin and I didn’t mind, as I knew his help in the Tour was important for me. Funnily enough, up till then, I felt really strong and able to do anything. However, I was now the team leader and that was when the problems began». Even so, he reaffirmed his leadership in the Valladolid time trial and, even though he encountered problems in the last stage but one, he managed to win the Tour of Spain for the second time to the delight of thousands of fans.

Too much self -confidence? Maybe, but Perico’s start of the Tour was heart stopping. Luck would have it that he took the start 2’40» late. «Even today I can’t explain what happened. I wanted to shine from the first pedal. I went to warm up which I never usually did. I wanted to get away from the press who hassled me all the time and I also wanted to keep my concentration. I meant to arrive just before the start. It was this and nothing else that made me late; none of the press’ meditations about my late start were true. I called myself stupid. The worst repercussion wasn’t so much the time lost so stupidly but that I couldn’t forgive myself and lost a night’s sleep over my own anger».The consequence was that the next day in the afternoon stage, Delgado was exhausted and in the team time trial lost 5 more minutes. «The Tour had only just started and there I was 7’20» behind Fignon and 9’57» behind the leader. I was the last at 198. The Frenchman came to say, «Delgado has lost the Tour»».

«Fortunately the following stages were not very hard and I was able to recover my spirits a bit». He was 2nd in the first individual time trial, just 24 seconds behind LeMond and he also gained 32″ against Fignon as well as the morale and optimism needed to know that the ’89 Tour of France was not finished for him.

He was 2nd yet again in a fantastic stage of the Pyrenees. «Things were getting better bit by bit and my expectations for the Alps helped me regain my well founded hopes». But the route of the Alps was not so mountainous as previous years and, besides, the stages were quite short and so Pedro was not able to recover the time needed to repeat last year’s triumph. He started out the last stage, a 25-km long time trial, not only physically but also mentally tired of this Tour. He was riding to keep his 3rd place as he knew it was impossible to recover the 2’28» that separated him from Fignon. This last stage was heart stopping. LeMond recovered the 50″ lost to Fignon and managed to win the Tour by 8″, the smallest difference in all the history of the Tour of France. «When I look back on this Tour of France, all that remains is the bitter memory of the start in Luxembourg, if it hadn’t been for that …».

His season finished practically with the Tour of Catalunya where he came 2nd and he was anxious for the season to come to an end and start on the next.