A new year and a new team. This time Pedro had signed on with a newly formed Dutch team called PDM who wanted to triumph in the Tour of France through Pedro Delgado.

Pedro wanted to improve his performance. Up till then his Achilles heel in road racing had been the team time trial (the previous year his team had come last and another headache was racing in the wind where rouleurs, mostly Belgians and Dutch performed to perfection.

The beginning of the year brought with it quite good results in some of the less important races. Despite not garnering victories, he was always at the front when the roads led to the mountains. However, Pedro was waiting for the major tours to excel… 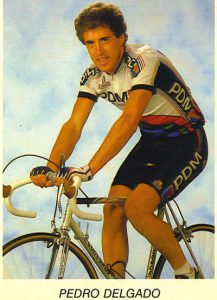 La Vuelta was passing by quite normally. Pedro climbed positions in the overall bit by bit. After the mountain stages of the Lakes, Naranco, San Isidro and the time trial at Valladolid, he was third overall behind Pino and Millar.

Alvaro Pino was worried by the threat of the Segovian. «Perico still hasn’t attacked properly. It’s as if he were invisible and yet he’s 3rd in the overall. He’s still got lots of strength and his cool head in the race worries me more than any other rival. Pedro races with his head. He’s waiting for his opportunity to attack and take over the yellow jersey».

A bout of flu during the decisive stage of Sierra Nevada made him feel unwell and so he lost 10 minutes to the winner of the stage and 8 to Alvaro Pino, the overall winner of the that year’s Vuelta. Delgado finished 10th and his mind was already on the Tour of France.

The beginning of the French race was not so good as his team performed badly in the team time trial. Then Pedro himself didn’t do very well in the individual time trial, which was completely flat and in which he never found his pace. He lost 7 minutes to Hinault, the overall favourite.

The Tour reached the Pyrenees and in the 217 km stage ending in Pau, with his eyes forever on Hinault, Pedro achieved a stage win. He improved his classification and jumped from 66th to 4th overall. On Sunday 20th July, now in the Alps, he performed well again and was 5th in the Serre Chevalier stage. He announced that he now saw himself more than ever in the podium at Paris. However fatal destiny was at his door; his mother died suddenly of a brain haemorrhage. The next day he took the start in order to honour his mother in a terrible stage which included the Galibier, the Croix de Fer and Alpe d’Huez. But at the Croix de Fer (Iron Cross) his bereavement was stronger than his will or his legs. He wanted to go on but couldn’t. With tears in his eyes he descended his bicycle and abandoned the Tour. Final victory was for Greg Lemond, with Hinault coming second.

«The day after my Mother’s death, I started the stage, suffered, competed but abandoned. I just couldn’t go on. I felt defeated. It coincided with the Tour’s major stage but my head wasn’t on the race. I had to suffer but I felt like a zombie… and in the end I collapsed. In cycling you need an awful lot of concentration to withstand the physical suffering. This was by far the saddest moment of my sporting career».

Fate always seemed against him in the Tour of France: just when he was at his best, a black cloud would appear on the horizon.